The third Antboy book in the trilogy, has just been released, therefore there had to be made a poster. Here are some of the sketches I made during my meeting with my editor and graphic designer Leo Scherfig (http://legalizer.dk/).

Check out the Antboy homepage: www.antboy.dk
Posted by Erik Petri at 5:13 PM 3 comments:

I did this illustration for a bookcover a while ago. My friend Martin Glaz Serup (http://kornkammer.blogspot.com/) called me and asked if I could make a cover for his new book: A futuristic thriller written in collaboration with Hanne Kvist (http://www.litteratursiden.dk/sw2945.asp). The book describes a post 9/11, terror paranoid survaillance society.

I picked the most dramatic scene in the book, where the main character and his two friends all of a sudden is surrounded by Terror-free-society Police officers. In the story three guns were pointing at the boys, but that became a too aggressive image (the book is intended for school children 6. grade and up), so I changed it a little bit and gave one of the Police officers a GPS-thing instead. Near the end of the book its revealed that one of the boys, unknowing, has spyware installed in his eyeballs. On the GPS display his point of view is seen.

The drawing is inkwashes, charcoal and photoshop. The bookdesign is made by Ida Balslev-Olesen. The book is published by Dansklærerforeningens Forlag and comes out in june.
Posted by Erik Petri at 4:27 PM No comments: 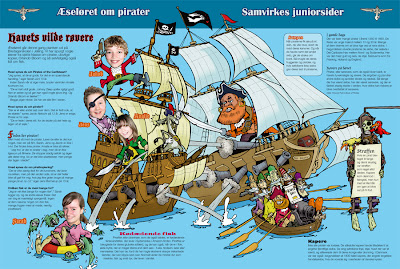 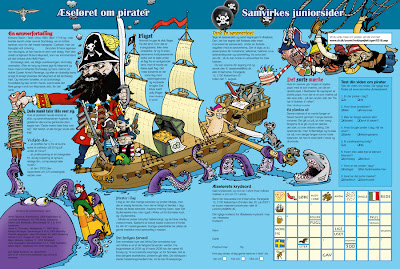 I just noticed that this weeks theme is captain.
These are two spreads I've layouted and illustrated for Samvirke magazine, Denmark, a while ago. I design two spreads every month, intended for kids age 8 and up.
It's a lot of fun to organize all the text, the photos and finding an illustration idea that will tight it all together.
Posted by Erik Petri at 2:39 PM 7 comments: