The horror book 'Krybet' I illustrated a while ago..and bloged about here. Was reviewed last saturday in Politiken by Steffen Larsen. He likes the book and the way I illustrated it, with two different styles: one for the traumatic grey real world and one for the imagined world of the Creep. I'm so happy, that the book recieved such a good review...that'll hopefully lead to a lot of books being sold at the bookstores..and people showing up for the author behind the book, Jacob Weinreich and my speech/performance/show at Bookforum. Sunday at 1pm. There will be booksigning and a drawing in the book afterwards.

If you haven't bought the book yet....you can attend this competition and win the book. The competition ends the 4th. of October.

Thanks for reading
Posted by Erik Petri at 2:23 PM No comments: 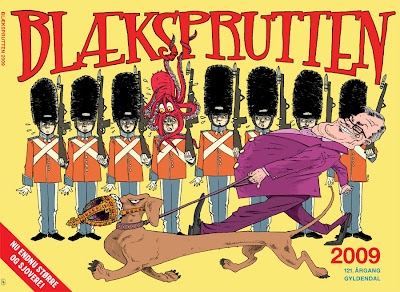 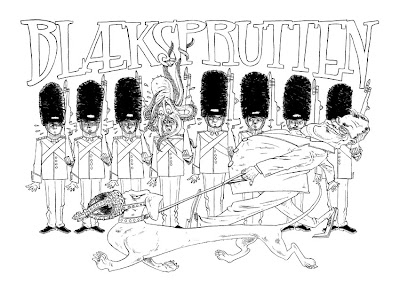 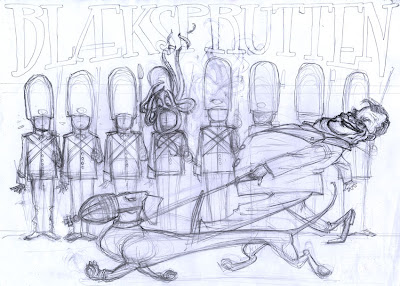 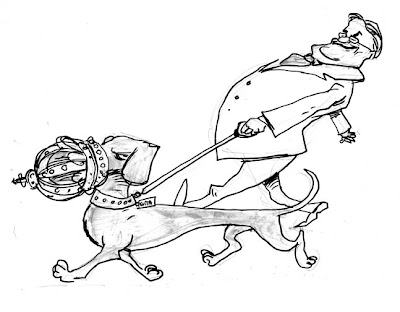 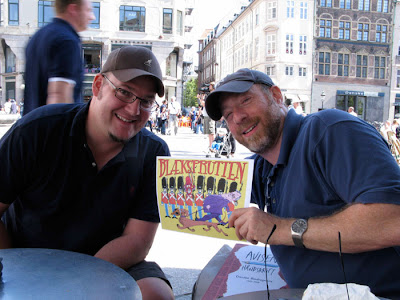 I did the cover for 'Blæksprutten' 2009. This satirical year review has been published since 1888, so I feel quite honored, that I was choosen to make the cover, the first year I'm contributing to the book. I have been a huge fan of political satire ever since I was a kid. My family always bought 'Blæksprutten' when it came out before Christmas, and a lot of the artist I admired then and now have contributed over the years. Artist like: Bo Bojesen, Poul Holck, Arne Ungermann and Roald Als
Now Im part of the team of cartoonist and writers that contributes with images, ideas and text to this marvelous publication. Im the new guy, so I just try to live up to my own expectations and learn as much as I can from the more experienced contributors....and I am enjoying every minute!

My cover features the Queens husband Prince Henrik. His Dachshound has bitten the Guardsmen multiple times, and there has been a discussion whether the dog is covered by royal imunity or not. At the same time the Prince is eager to have the Parlament changing the law, so he can become King instead of prince...and finally there has been a whole series of incidents where muscledogs have been attacking kids and small pets, and therefore have created a tense debate about these dogs...should they wear a muzzled. I have tried to cook all these different things into one image....that hopefully will sell a lot of 'Blæksprutten' at the stores.

In August American Cartoonist and Illustrator Steve Brodner and his friend Cynthia visited Copenhagen as a stop on theior Baltic Cruise. You can read his blogpost about his trip here. I was fortunate to spend the day with them. Steve has always been one of my big heroes due to his draughtmanship and his political satire. I was great talking to Steve about the art of satirical drawing, where the business is going and the differencies between big USA and tiny Denmark.

NB: The annual review 'Blæksprutten' will be in the stores from November the 12th.
Posted by Erik Petri at 7:16 PM 4 comments:

Infinate ways of counseling students when writing their thesis 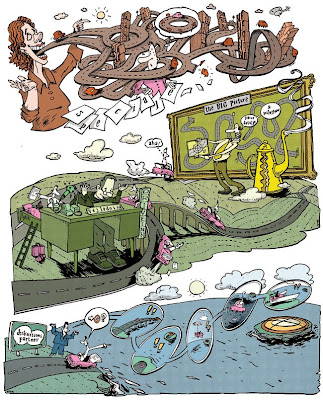 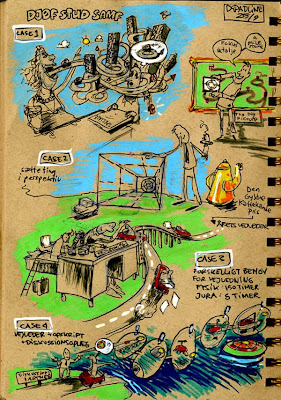 I did this illustration for a university magazine for oeconomics and law students.
The job was to come up with a full page illustration where different parts of the image could be used as vignettes for four different articles dealing with the role of the counselor when students are writing their thesis.
I picked the road as a methaphor for the writing process. It's a journey (at least six months of writing..it's a master degree) and it's very easy to stray away from the right path, getting sucked into details, loosing the bigger picture, start doubting ones objectives....is the right one, or should I. To write a good thesis is a difficult task and therefore a good counselor can be of great help.
Posted by Erik Petri at 6:31 PM 3 comments:

The consellors job is to guide and help the student through their thesis. Making sure they don't get lost in details, forget about the objectives and doesn't relate the detail to the bigger picture.
Posted by Erik Petri at 6:22 PM No comments:

Infinate ways of counseling: but couseling needs are different

Students writing their thesis have different needs for counseling depending on the topic they are mayoring in. Physics mayors need approximately 150 hours, law student just five hours. It varies a lot, but mayors with labwork needs more counseling than students that can work from their home.
Posted by Erik Petri at 6:15 PM No comments:

Infinate ways of counseling: through discussion

Instead of giving answer the student counselor should seek a discussion with the student. Talk and debate about the objectives and how to get there. To end up halfway through a project without having established the goal and objectives is what should be awoided.
Posted by Erik Petri at 5:52 PM No comments: 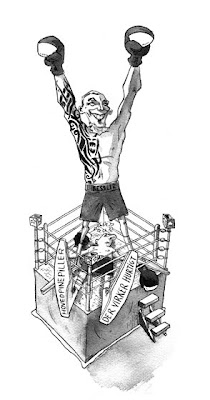 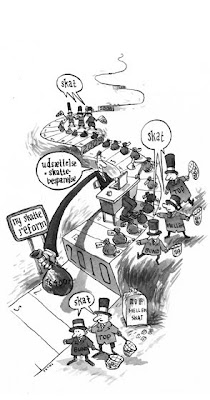 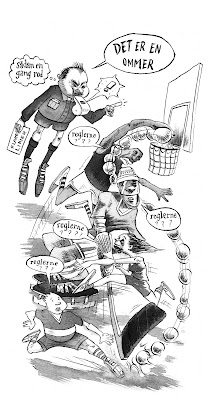 Posted by Erik Petri at 6:24 PM No comments:

Lawstuff: An insurance claim is not valid after five years 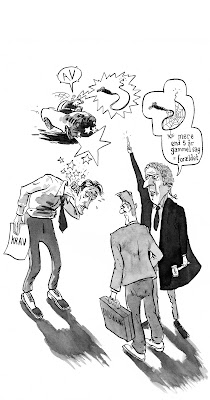 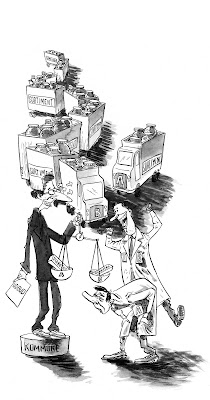 welcome..pricing cellphone talk in the EU 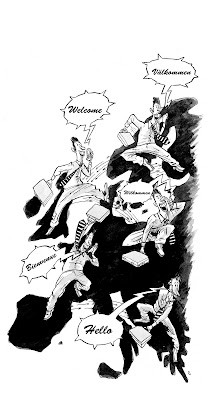 The EU have made rules about how much phone companies can charge people for calling from outside their own country/ going through another (foreigh) operator. This means that people taking their cellphone with them on business or leisure trips within the European Union don't get ripped off financially when they recieve or make a phonecall. The drawing was done for a newsletter from a lawyer firm.

Thanks for reading.
-Erik
Posted by Erik Petri at 9:32 PM 1 comment: 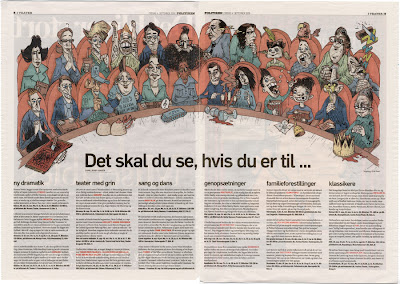 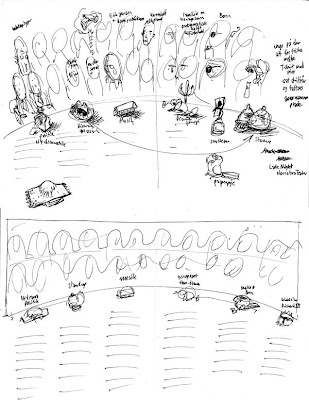 Last week I had a meeting with journalist Camilla Høy-Jensen, where we talked about the article "6 different kinds of theater - 6 different kinds of audiences". I sketched as we talked, and where able to come up with an idea an a compostion that would fit the topic as well as the design of the newspaper spread. After the meeting I just had to refine the sketch an add colors in photoshop. I really love drawing for newspapers 'cause there is so much space left for illustrations, the assignments come with a lot of creative freedom and after handing in the artwork I get to see the result in the printed paper soon after.

for a book that will be published in Nepal 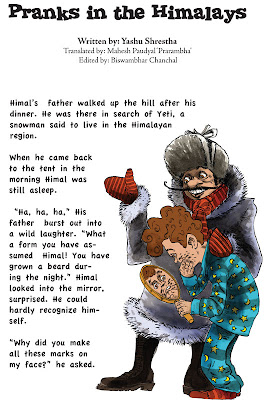 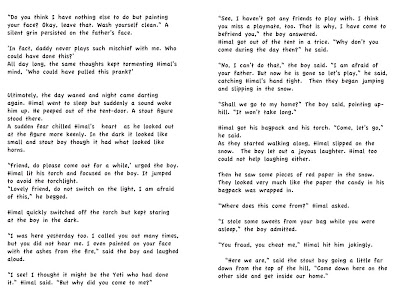 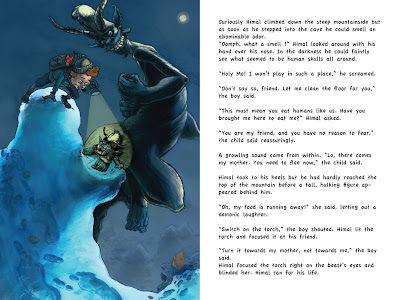 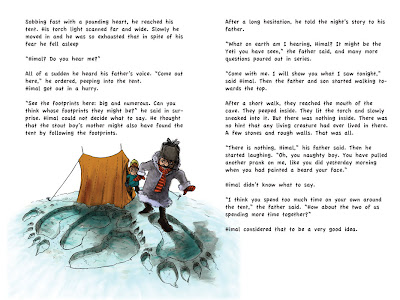 This has been an interesting process. First I did a fullpage illustration over the theme "Light". My illustration/interpretation of the theme, were then emailed to an author Nepal. Then he would come up with a story that suited the image, then I recieved his story and refine my illustration and did two vignettes.
The story and illustrations will be printed in a book together with 11 other Nepal-Denmark collaborations between author and illustrator.
Posted by Erik Petri at 5:32 PM 1 comment: