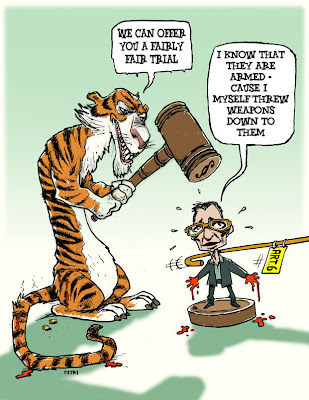 Danish citizen Niels Holck was involved in the smuggling of weapons to terrorist organisation Ananda Marga in West Bengal, to help them fight the local government.

He is guilty, but due to the European Convention on Human Rights article 6: The right to a fair trial", Niels Holck can not be handed over to an authority that might give him an unfair trial and a death sentence.....cause the death sentence is banned within the EU.

..........so he is guilty, but he can't be brought to trial in the country where he carried out his deed, due to article 6 ...one could argue, that he is being saved by the human rights, that he himself didn't much for when he armed a terrorist group in India!

please leave your comments
Posted by Erik Petri at 11:44 AM

I was unaware of the political situation, and this image pretty much explains it all. Representing the authorities as a giant tiger is a good idea. Nice work!

I'll not get into a political debate but I will complement you on an excellent illustration.