IF: "Grow" -concerning the growing population of Red King Crabs 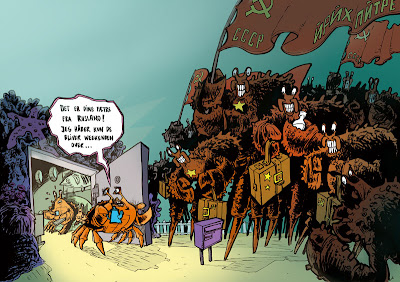 I just did this illustration about invasive species for a magazine.

The red king crab is most commonly caught in the Bering Sea and Norton Sound, Alaska. Recently, an overpopulation of red king crabs in the Barents Sea is causing concern about the local biosystems. It was introduced artificially in the Murmansk Fjord in Russia during the 1960s to provide new catch for the Soviet fishermen. Since its introduction it has spread west along the Norwegian coast and also towards the island group of Svalbard. Environmentalists and some local fishermen fear the crab because it eats everything it comes across and is spreading very rapidly. The red king crab has been moving down the norwegian coastline since 1976 and is slowly heading towards Denmark.

The little orange crab tells her husband with the remote: "It's your cousins from Russia! I hope they are staying just for the weekend..."
Posted by Erik Petri at 12:27 PM

Great ink work! I love the shadows too.

this ones really nice. I love how you used the blacks and also the colors are especially good

Rich and wonderful. What a great scene you created!

I love it for two reasons:
-First it's an amazing and awesome illustration;
-Second it's crabs talking in a foreign (to me) language!

Thanks for your comments and thanks for visiting my blog.
-Erik