making a big cartoon about Tuvalu 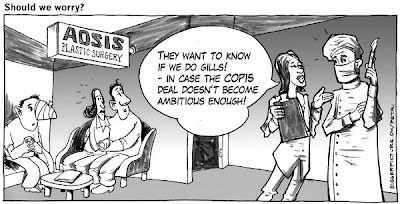 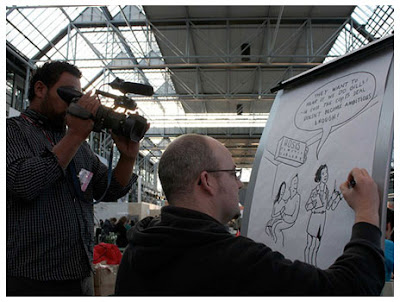 Everyday at the COP15 we (Stine, Ole, Thomas, Jane and I) did a poster size drawing that would 'advertise' for our workstation. Friday the 11.th of December I came up with a cartoon idea on my trainride to the Bella Center ... about a couple that worries about the lack of progress in the negotiations ensuring a rise in temperature be kept below 1,5 degrees celcius. I had only put a few lines on the paper before the image caught the interest of a journalist with a camera. He was from one of the small island states and liked the cartoons and we made an interview. Later on a journalist from Cook Island interviewed and filmed me ... you can see the interview here
Later on I did a smaller version of the cartoon for *Draw the Line'
Posted by Erik Petri at 9:23 PM