Antboy - the book version and the film version

Antboy in the books have created his outfit, his superhero suit, by himself, using bits and pieces from his old Halloween costumes: his musketeer dress, his ninja dress, his wizard (Merlin) outfit, his alien monster suit and two tea strainers .... being a skilled and talented tailor he sew all the pieces together for his superhero costume - 10 year old boys can not afford to buy expensive drugs or get the suit made ​​by a professional, which could also ruin the whole idea about having a secret identity.

In the film Antboy has gotten the cool costume he probably would have dreamed of getting in the books. It is Denmark's history most expensive film costume ... and probably the coolest heroes clothes if you ask me ...

The film premieres in the fall of 2013 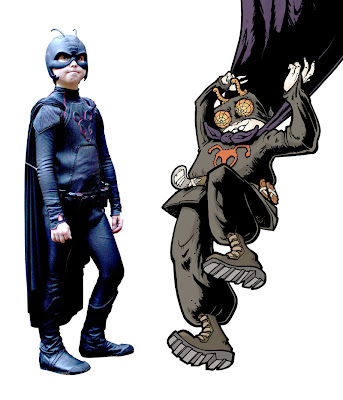