the Prohibition of Torture is a Human Right 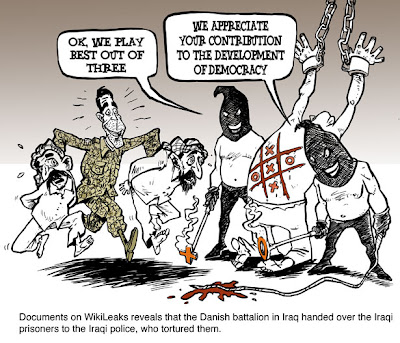 so after all...danish soldiers understanding of how you help to built a democracy, included handing over prisioners to local police, that later would torture them....well technically the danish troops handed the prisoners over to the british troops...and therefore didn't know what happened hereafter...hmmmm!
Being Georg Bush's pet and at the same time act acording to the European bill of Human Rights isn't as easy...as it sounds on TV...first we were caught on tape handing over prisoners to torture in Afghanistan..and now Wikileaks have revealed we did the same thing in Iraq....nice and comforting that the primeminister who allowed it, is now the head of NATO!
Posted by Erik Petri at 9:59 AM

It is so nice to see how something that seems so different to me perfectly fits as your forte! Brilliant stuff!